From pinhole cameras to Body Worn Cameras, the camera has definitely come a long way. For more information on body cameras, visit http://www.pinnacleresponse.com/body-cameras-and-the-law/. We love to capture moments and cherish them, whether they are still images or video recordings. The camera is easily one of the most prized possessions and our social media accounts would be nowhere near as much if weren’t for our uploaded images and recordings. Cameras have a long history and have been through many stages of evolution.

The first camera was called the camera obscura which used lens or pinholes to project images upside down on viewing surfaces by Ancient Greeks and the Chinese. This device was used in 1544 by mathematician Frisius for watching a solar eclipse. There was no way of preserving these images other than to trace them by hand.

The first camera as we would recognise one today was invented by Alexander Wolcott in 1840. This was the first time it became possible to create candid pictures that did not fade away. However, the first pictures were taken with a device designed by Joseph Nicephore Niepce who used a sliding wooden box to take photographs.

He didn’t stop there as in 1836, with a chap called Louis Daguerre, he made a photographic mechanism known as daguerreotype by coating silver on a copper plate which was then treated with iodine vapour to make it sensitive to light. The image could now be developed using salt solution and mercury vapour. Much competition followed, which was great for the advancement of cameras and soon cameras were being developed that were small enough to hold, had lower exposure times and there were different designs to choose from. 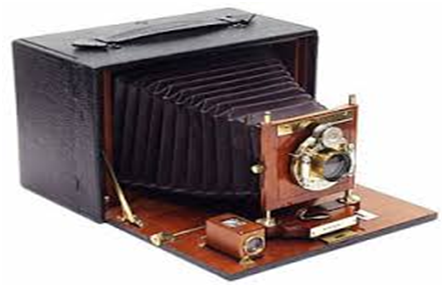 George Eastman introduced paper film in 1885 and switched to celluloid in 1889. It was this chap who gave us Kodak, the camera which came to the market in 1888. It was nothing flashy but because of its low price, photography became available to the masses for the first time. It had the ability to take 100 shots with preloaded film which could then be reloaded.

Around 1913, a German optical engineer named Oskar Barnack made a prototype compact camera which was put into production in 1925. Polaroid cameras hit the market in 1948 which allowed photographers to produce pictures instantly and used a chemical process to produce prints from the negative in under one minute. The popularity of instant cameras really took off in 1965 with the introduction of the Polaroid Model 20 Swinger which was one of the best selling cameras of all time.

The first successful digital image was made in 1969 but it wasn’t until 1991 that the first commercial DSLR (digital single lens reflex) was launched by Kodak. The popularity of digital cameras surged at the turn of the new millennium and as technology improved, costs decreased. Modern cameras produce extremely detailed pictures made up of a massive number of pixels and technology is evolving constantly as we now see touch screens and electronic viewfinders.