I can not think of a better way to start the year with this detached house is located in the old village of La Cerdanya in Lleida, surrounded by forests and with spectacular views of the natural park of Cadí and the Valley of the Cerdanya. The town began to rehabilitate fifteen years ago and, since then, there are already five houses rebuilt.

With its reform project, Dom Arquitectura set out to build a house with traditional elements and, at the same time, to ensure that it is modern and offers a welcoming atmosphere. The main objective of the intervention was to fully integrate the construction in its privileged rural environment, respecting the traditional forms and materials of the area.

The materials are limited to the native stone of the facade, the manual ceramic tile, and the pine wood of the wall and roof structure. To them iron is added, a polyvalent material that is used to resolve encounters and better detail the finishes. Thus, on the outside it is applied in frames and gutters, and on the inside in luminaires, chimney, stairs and other finishing touches.

The project proposes an L-shaped plant, with two perpendicular wings that host the day and night areas . The first, totally open, is oriented to the southeast, and the second, more compartmentalized, to the southwest. The stone cladding of the facade has two setbacks in the areas of the rooms and the porch, both covered with exterior wood to highlight the importance of this material. The same happens in the access from the street on the first floor. 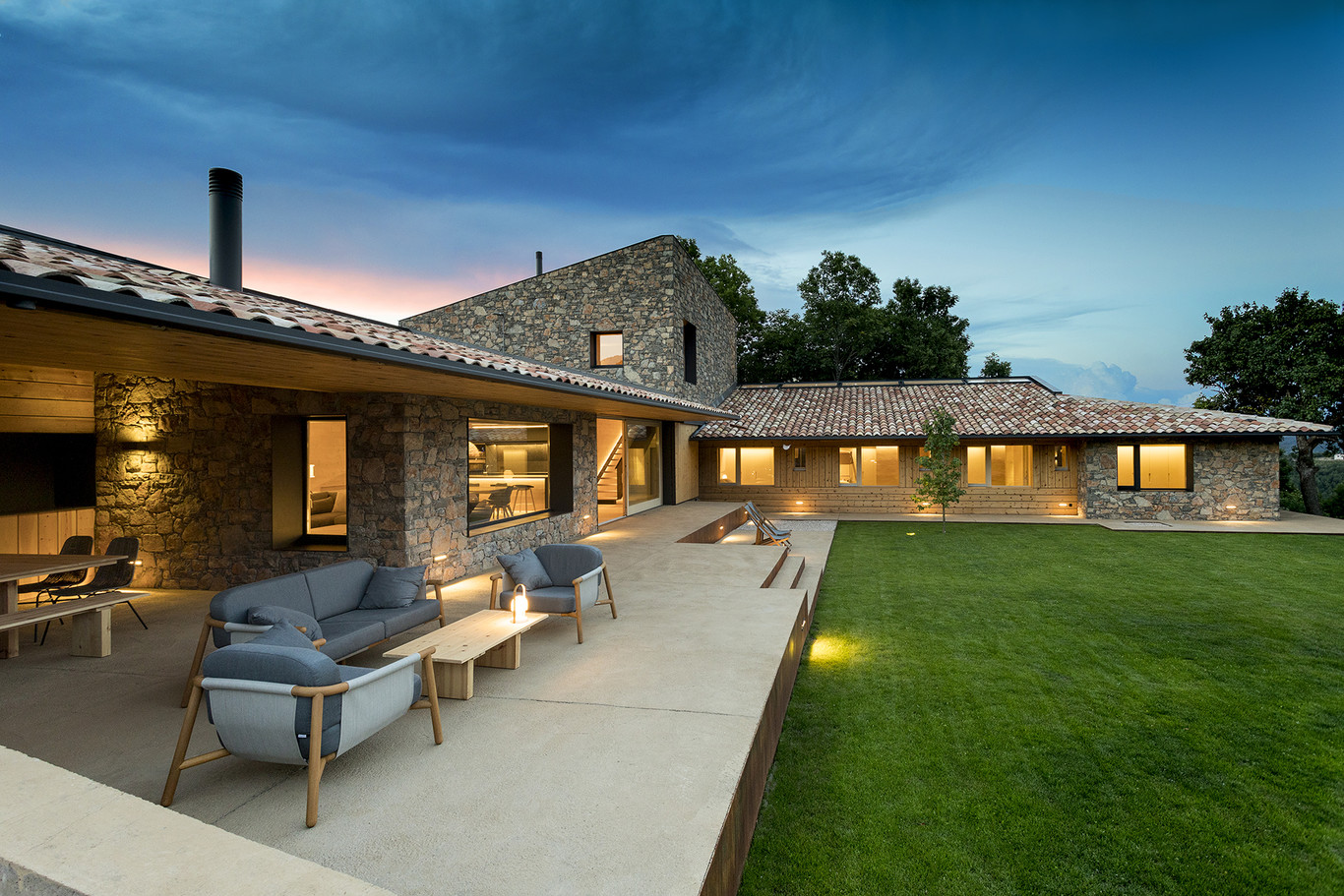 The wood captures all the leading role in the interior of the house: walls and ceilings are covered with fir ceilings, and the floor is covered with floating parquet of brushed natural oak. In this way, using a single material treated in different ways, a large part of the solutions and finishes are solved. The day area welcomes, in a large, open and visually continuous space, the living room, the dining room and the kitchen. In it the furniture helps to create semi-collected rooms, forming cozy areas typical of a mountain home.

In the kitchen, the choice of the LINE Black Silk LAH model from Santos is totally consistent with the main guideline of the project: creating a timeless environment, in which traditional elements coexist harmoniously with other contemporaries. The furniture with minimalist design, with smooth and dark fronts, is integrated without stridency in the high partitions covered with wood, defining a space with character and personality without subtracting useful space.

The projection of the kitchen seeks to provide maximum capacity and functionality without overloading the space. The furniture is distributed from a large islandthat, in addition to a large work surface, offers multiple solutions for organization and storage. In parallel to the island there is a linear furniture that, in its central part, gathers the cooking and scrubbing areas, formed by a sink and two portaplaca modules with drawers of total extraction and large capacity.

Forming an L with this linear, the second furniture block groups a column with shelves , another one for service, three drawers and three high lateral opening modules. Its configuration generates a niche for placing small appliances and function as a breakfast area. Behind the kitchen there is a laundry area, furnished with an ARIANE Blanco Perla de Santos design.

The organization of the living area is based on a key concept : to preserve the moment of family recollection that represents the tradition of gathering around the fire . The living room, presided over by a fireplace, is equipped with Joquer sofas and armchairs, a square central table, a Forghani rug and lamps from Marset and Santa & Cole. The dining room is then arranged, consisting of a bench, a table and a wicker lamp by Dom Arquitectura, and Pilma chairs.

The access corridor to the bedrooms is a narrow and high space. To endow it with life, a large skylight is raised that floods it with natural light. Being buried, the wall of this corridor is treated with natural clays that help control humidity.

The night area includes three identical children’s bedrooms , designed for the three children of the family. Two of these rooms have been unified punctually, generating a wider stay in which children, still small, can play and sleep together. The remaining room is intended for guests and, at the end of the wing, the master suite is located.