If you’ve recently started to clear out your garage then you might have unearthed a few things you wish you hadn’t. If you’re an arachnophobe then chances are you’ve been sent running and screaming out of the garage a few times by now. With reports of super-sized creepy crawlies lurking in our garages, now is the time to get your gloves on and clean out that garage! Don’t give them a cosy home if you don’t want them entering your cosy home. Sort out all those boxes and random bits of junk so they can’t set up camp in a warm, damp corner. For storage solutions, think about Garage Shelving instead of boxes. For more information, visit https://www.garage-shelving.co.uk

Here are some of the spiders you are most likely to encounter in and around our homes:

This is one spider who often ventures indoors during autumn and winter. It gets its name from the fact that the web it spins has one full section missing. It is a fairly small spider and is not at all dangerous. It has a pale body and legs with silvery-grey markings on the abdomen.

These are the fellas usually seen hanging in the corner on the ceiling. It has a tiny body but long, thin legs. These spiders are fairly harmless, although they can bite but it won’t do you any harm apart from a mild, brief burning feeling, if anything.

These are the big chaps that usually make us scream and run away. Commonly found around the home from September onwards as they hunt for a mate. Most often found in the bath tub, garages, sheds, attics and cavity walls. They can measure up to 120mm and although potentially they can bite and do have venom, they don’t pose much of a threat as they are not aggressive. 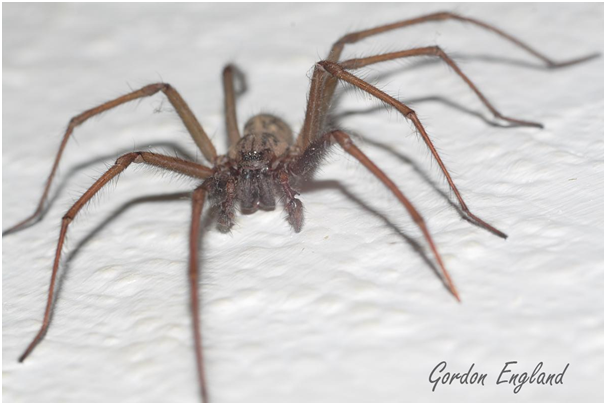 This arachnid spins a stunning web and are usually found on fences or outside walls but will come inside in the autumn months. They generally grow to a size of around 20mm and are brown with yellow markings on the abdomen. Be aware of these critters as they have been known to bite and the bite can be painful with some swelling for about 12 hours.

This spider has a very bad reputation and is known as the most venomous spider in the UK. The species usually has an overall size of 20mm and is recognised by a dark brown colour and a bulbous abdomen. Adult female false widow spiders are known to have bitten humans, although they are not usually aggressive and attacks on people are rare and there are no reported UK deaths. Symptoms of a bite can range from a numb sensation to severe swelling and discomfort.

This is one huge spider and is the biggest species in the UK with an average length of 14cm. Interestingly, it is known as the cardinal spider in Britain because legend says that Cardinal Thomas Wolsey was terrified by this species at Hampton Court back in the 16th century. Although they are mainly harmless to humans, these arachnids get a bad reputation because of their huge size, incredible speed and their nocturnal habits.