It is important to recognise the different species of pest birds because the products and methods used in their removal vary from species to species. Here are the important points to look out for when identifying nuisance birds. 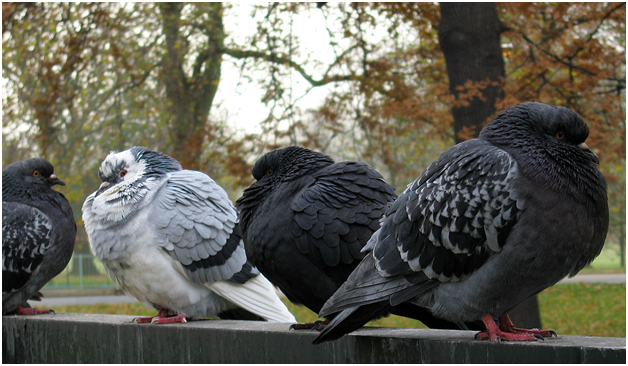 Feral pigeons are descended from domestic homing pigeons brought from Europe in the 17th century. They are usually blue grey with iridescent feathers on their heads and necks although they may have brown or white plumage. They also have distinctive black bands across the wings and the tail. Pigeons generally have short necks and small heads. Their legs are also short and they are not intimidated by humans. Nuisance pigeons can also include homing pigeons as a recent report from the Lancashire Telegraph reports.

Gulls can also pose a nuisance especially in coastal areas. A typical gull can be identified by its light coloured body and dark wing tips although there are many different species of gull and their plumage can change in colour between seasons.

Although not immediately associated with the need for nuisance bird management, house sparrows can become a nuisance in some areas where they nest in all sorts of urban structures. The male house sparrow can be identified by black patches on its chest and throat, and lighter cheeks. The female is much duller in colour.

Starlings are known to be quite aggressive birds and flock together in extremely large groups so they can create a nuisance in urban areas when they roost. The plumage of the starling can vary depending on the time of year but it is speckled and iridescent, being more striking in the winter than in the summer. They have long slender bills and short tails. Specialist companies such as http://www.vvenv.co.uk nuisance bird management services can provide advice on the management of these birds.

Some homeowners need professional help to prevent swallows from nesting as their nesting habits can deface buildings . They are very distinctive with brownish red throats and faces, light belly, blue black coat and forked tails.

Crows are less likely to cause a nuisance but they are scavengers and will eat almost anything. They are intelligent birds and are easy to recognise, being large, heavily built birds that are glossy black all over. They are often seen in large flocks.