The media adore a celebrity wedding, especially the magazines lucky enough to secure exclusive access to the glitzy photo shoots. Most celebrity weddings have little or no budget restrictions, which means we’ve seen some pretty lavish affairs in the past. Here are some of the most expensive and memorable celeb weddings:

David Beckham & Victoria Adams
This might as well have been a royal wedding, such was its scale and media attraction. The couple wed in 1999 at Luttrellstown Castle near Dublin and the royal theme didn’t end there. They had velvet thrones and even trumpeters to welcome their guests. The festivities concluded with a firework display at the end of the night. The cost of the castle hire, Vera Wang bridal gown, jewellery and rings was estimated at just over half a million. For your own very regal but slightly less extravagant wedding, think about hiring a Kent Wedding Photographer at http://www.tylermadephotography.com

Brad Pitt & Jennifer Aniston
Back in 2000, this was one of Hollywood’s biggest weddings and it took place at the lush Malibu estate of a TV producer. The thing the couple wanted most was privacy and each member of the wedding staff had to sign a confidentiality agreement. It was said to be a stunning scene, with over 50,000 flowers and white candles in a reception tent. However, it doesn’t matter who you are or how much you pay, problems still happen. The caterers ran out of food and the cake melted in the heat! The estimated cost is thought to have been $1 million.

Donald Trump & Melania Knauss
The now globally famous couple married in Palm Beach, Florida in 2005. Melania stole the show in her strapless gown by Christian Dior which featured 300 feet of satin complete with 1,500 crystals. It took 1,000 hours to create. There were 100 limousines to carry guests to the ballroom reception at the Mar-a-Lago estate. 500 guests were treated to a meal prepared by 45 chefs, a 36-piece orchestra and a 5-foot wedding cake! All in, the knees up was estimated at just over $1 million. 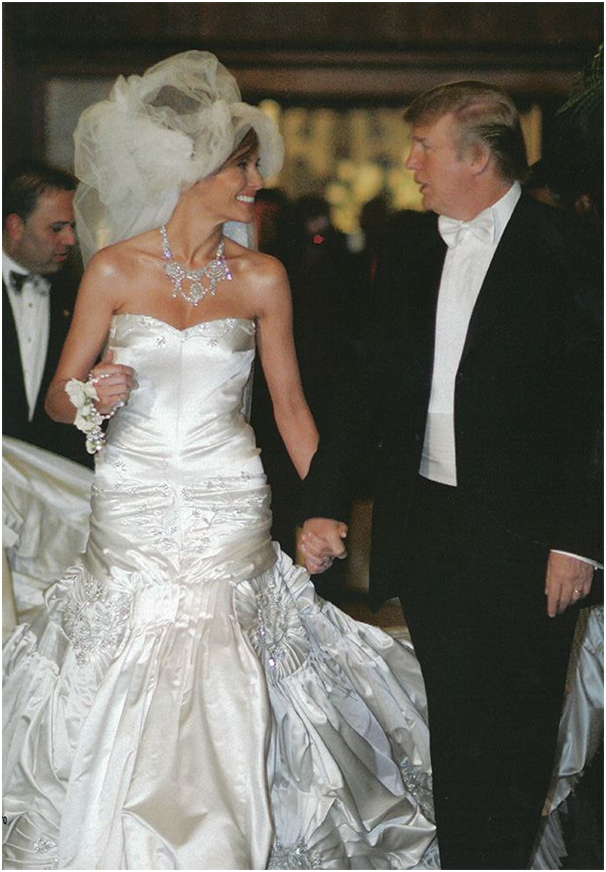 There was a huge media frenzy over this event on the Hollywood calendar. In November 2005, the couple wed at the glitzy Plaza Hotel in New York. Privacy was paramount, and 50 guards were hired, 30 of whom were police officers. Guests were asked to attend with their invitations which had been marked with invisible ink and holograms, so they could not be faked. Hire of the Presidential Suite, champagne, diamond tiara, Christian Lacroix dress and cake came in at a cool $1.5 million.

This couple tied the knot in December 2005 in the very first week that same sex civil ceremonies were made legal in Britain. The vows were exchanged at Windsor’s Guildhall, followed by a bash with over 600 guests invited. As well as caviar, there was vintage pink champagne said to cost over £200 a bottle. The total cost of suits, rings and fine dining was said to be close to a £1 million.