Emergency vehicles and ambulances are an everyday sight on our roads but how did we transport patients before there were motorized vehicles? As well as emergency response, ambulances are a common sight at outdoor events of all kinds. For Events Medical Cover, visit https://www.outdoormedicalsolutions.co.uk/event-medical-cover/ Here we look at a brief history of the how the motorized ambulance came to be:

The idea of ambulances has been around since ancient times. Carts were used to transport patients, but the first known use of emergency transport occurred in 1487, used by Spanish forces during the siege of Malaga. Variations of stretchers on poles being suspended between horses were used right up until the 20th century.

The idea of having a dedicated response service first appeared in Liverpool in 1880 when the president of the Liverpool Medical Association thought the city should have a horse-drawn ambulance to serve the city. Four years later the service began, and it was the first in the country.

The first-time people saw motorised emergency vehicles was during the First World War when they were used to transport the wounded. On 12th September 1914 a meeting was held at the Royal Automobile Club and members offered themselves and use of their vehicles to the British Red Cross.

The Red Cross formed a motor ambulance unit which grew to contain 3,446 vehicles of which 2,171 were used as ambulances and sent to different locations of the war. Following an appeal in The Times newspaper, the Red Cross had raised enough money in three weeks to purchase 512 ambulances. Motorised ambulances were far more effective in transporting the wounded rather than horseback and by the end of 1914, there were 120 such vehicles operating in France.

Amazingly, over the course of the war some 2,500 drivers, both male and female were employed to drive these vehicles through France. The first ambulances to be seen on the streets of Britain were in 1919. 500 ambulances were made available to help the sick and injured around the country. The first hospital train was seen in South Africa and was used during the Boer War of 1899-1902. The train carried over seven thousand wounded soldiers. The British also used hospital trains that were in operation during the First World War in France. They carried a staggering 461,844 wounded. 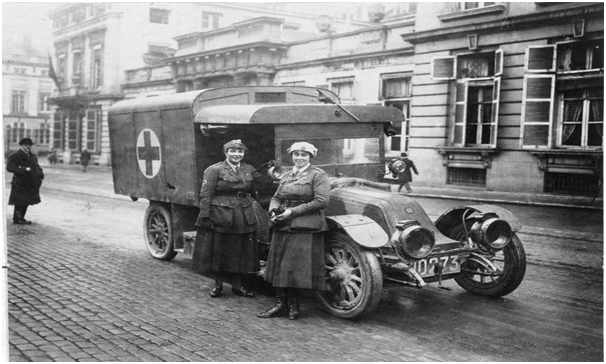 Air Ambulances came later and the first was named after Florence Nightingale in 1934. It was quite ahead of its time and carried blood transfusion equipment and an oxygen tent. A shortage of pilots made both the Air Force and the War Office nervous and so members of flying clubs and smaller companies were encouraged to volunteer their services. Structures were also put in place for licensed female pilots to be trained for air ambulance work.

Ambulances first became mobile treatment units in 1952 after the Harrow and Wealdstone rail crash. It was decided that ambulances could no longer just be a method of transport but had to have the facilities to treat people in an emergency situation. Around this time CPR was also developed. Ambulances were also constructed to have a high enough patient care area, so one person could continue care whilst in transit.